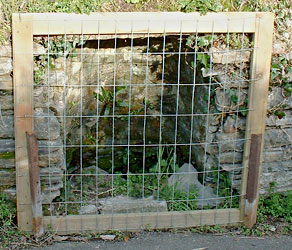 Until 1871, drinking water was available for most people only from wells, many of which still exist in hidden places, although an ancient water supply served the west end of Bampton by means of a Town Leat which ran through the churchyard towards that part of Mary Lane which ran from Newton Square to the church. The feeder spring is in a field about a mile from the town just south of the South Molton Road. 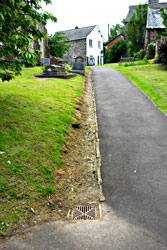 It also served houses in Luke Street and Fore Street in open channels which ran into the houses. In 1852 and 1853, complaints were made to the Court Leet that the branch of the town leat which ran through the churchyard towards Mary Lane was turned from its original course to the annoyance of the householders.

In August 1869 the Local Board threatened to take legal action against Robert Brewer for continually blocking the pipe with grass and turfs. In that year, Mr. M. J. C. Phillips of Silver Street (then known as Little Silver) started work on a piped a public supply of water into the town from the leat. Close to the present school he had a small reservoir constructed to keep the supply fairly constant. Mr. Phillips paid for the pipework whilst the townsfolk paid for the masonry which surrounded the main tap. 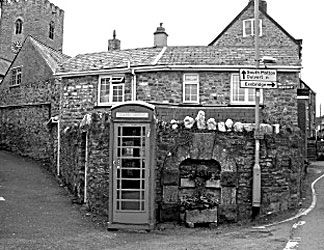 It and a commemorative plaque still stands in Newton Square, with the inscription “ERECTED AS A MARK OF RESPECT AND GRATITUDE BY THE INHABITANTS FOR THE GIFT OF M.J.C. PHILLIPS A NATIVE OF THIS PARISH WHO AT HIS OWN COST CONSTRUCTED THE PIPES TO BRING THE WATER AND SPRING TO DIVERSE PARTS OF THIS TOWN A.D.1874” with a biblical quotation below “whosoever will, let him take the water of life freely”. Our thanks to Jonathan Hill for deciphering the weatherworn engraving. It is a Grade II Listed Monument. Work was under way in 1871 - on June 21st a bill was presented to the Local Board for £42.10s.0d. “for conveying the water to Swan Corner”, by John Crudge and John Hookway. Further correspondence in September 1871 concerned the provision of a reservoir and drinking troughs for horses. Four troughs cost £2.13s.0d., plus 7s.8d. for carriage from Scotland. The total for supplying and fitting them was £5.7s.2d. 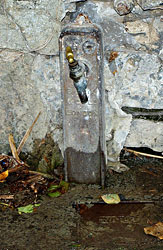 The taps were a great help to those people living on high ground whose wells dried up in dry weather, who could now come to the public taps armed with buckets and pans. Others were provided in Mary Lane, outside The Swan Hotel, in Frog Street, beside the Town Mill, and by the Toll House. Steps led down into the Shuttern Brook in Frog Street and Brook Street whence water could be drawn for cleaning and laundry, but not drinking. Before the Shuttern was enclosed, the water ran over a number of small weirs to allow householders to draw water, some of whom used small handpumps to take it direct into their homes. Most houses and businesses on level ground in the town had their own wells; the buildings are standing on gravel and shingle which has a high water content. The brook was re-covered in the early 1930’s, and the old handpumps and weirs were removed. 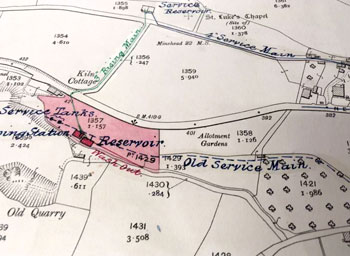 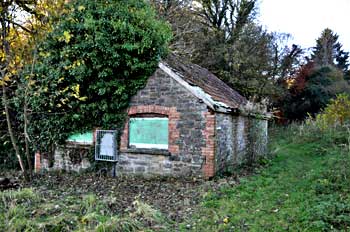 A mains water supply was installed in 1924 by Bampton Urban District Council (planning map above 1923), employing Scott's to provide a new reservoir just off High Street near the site of St. Luke’s chapel. They installed a pump (the old pumping house still stands at Millennium Green) at the old reservoir to supply the new, larger one, and today the majority of houses are fed from this reservoir, which nowadays is fed from a pumping station at Bolham, near Tiverton. 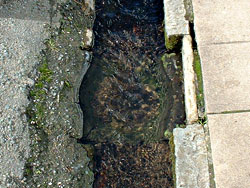 With the reservoir, a number of extra taps and ‘dipping places’ were provided for those who did not wish to be connected to the new mains supply! Tiverton Rural District Council became the Water Authority until the North Devon Water Board was formed in 1954. In April 1974 the South West Water Authority was formed.

Near the Pump House is an original valve for controlling the water flow.

Before the advent of electricity, oil lamps and candles were the only means of illumination. Late in the 19th century, eight or nine oil lamps were provided on the streets at strategic places in the town. They were useless as street lights, being only some 25 candle power in the beginning, but were useful as rather dim landmarks to aim for. In 1908, stronger lamps were being investigated, 50 or 100 candle-power. They were not lit for the seven nights following the full moon – not much use on cloudy nights! The oil used in the lamps was Royal Daylight Petroleum which in 1906 cost 7d. per gallon. Mr. Freddie Seward (no relation to the present Seward family) had the contract to light, extinguish, and maintain the lamps. He was followed by Mr. Hellier, who was paid 6s. per week. In 1908 the contract was again advertised, the lowest tender of the six applicants being accepted – 1s.4½d per day. In 1906 a travelling showman accidentally knocked over and destroyed a street lamp. He was traced, police station by police station, each replying by post to the last’s enquiry, to Nottingham. The Council had asked for £1.10.0. to replace the lamp, but they eventually settled for £1.0.0.

Electricity came to Bampton in 1927, preparatory work having begun in February 1926 when The Exe Valley Electric Company established itself at 27 Brook Street and was selling its shares. It was an off-shoot of Whitehall Securities, an international company based in London. The supply was 110 volts D.C., and was instigated by two electrical engineers, Miss Margaret Partridge and Mr. Burgoyne. The streets in Bampton were the first to be lit as an experiment, using low wattage bulbs. The joke at the time was that a match had to be struck in order to find the electric lamps! These new lights replaced the oil lamps, which had been lit by the lamplighter who then found himself redundant. He often had been plagued by the local boys who, as soon as his back was turned, used to put out the lamps he had just lit, then beat a hasty retreat. The new lights in the streets were a cause of some jealousy with the residents of Tiverton, who had to remain content with their gas lights. The batteries supplying the street lights were kept charged by Mr. Seward [of the present family] behind his bakery in Newton Square.

Once the experiment appeared to be a success, the next to be lit were those households who wished to be connected. A limiter was installed in each house, ensuring that no more than two 40 watt bulbs were in use at any one time. A third light switched on put the whole lot out, until one was switched off. The charge for this service was 1s.6d. per week. Another early user of electricity was the church, who obtained an estimate of £64.2.0. in 1926 for 20 lights to be installed, although, doubtless, without the limiting device. A bank of batteries for the domestic users was charged at Scott's by a new diesel engine and more were charged by a turbine at the Town Mill. The system changed to A.C. in 1929. In that year, Bampton Urban District Council was considering the installation of three sets of traffic lights in the town! There was no need for them - there was virtually no traffic - but the idea was simply to keep up to date with things modern. An overhead mains supply came to Bampton from Williton in Somerset around 1937, supplying Dulverton and the northern end of Bampton. The Exe Valley Electric Co. had a showroom at 10a Newton Square [now the hairdressers, part of No. 8] until the 1940’s, and they remained responsible for the supply until nationalisation in 1947.

Some premises generated their own supply until they became connected to the mains. A water wheel powered by a series of three millponds was in use at Benshayes Farm to supply electric power to the dairy until 1963, and it took until May 1963 for a supply to reach The Exeter Inn. Farms always had a need for power of some sort, and until the Industrial Revolution this was provided by horse or water power. A typical water wheel operation was in use at Sparkhayne from 1880 until 1965. Until 1957 it operated the following machinery: a thrasher, a reed comber, a corn roller, a corn grinder, a grain winnower, a chaff cutter, a sawbench, and, remotely to a nearby building, a cider press. From then until 1965 it generated electricity from a turbine. The wheel was overshot and 13 feet in diameter, operated from a still existing millpond.

Where water power was not possible owing to the lack of a good water supply, round houses were used for grain, the motive power being a horse. To an extent, steam engines replaced the horse and water wheel, but few are known in the Bampton area, the only known machinery to use it locally were a threshing machine on the Combehead estate in the early 1800’s, and the mill at Petton. Water wheels were also known to exist at Wonham, Westbrook, Birchdown, Ganders, and the mills: the Town Mills, Shillingford, Ford, Denscombe, Petton, and the Tucking Mill.

A mains gas supply has yet to reach Bampton!