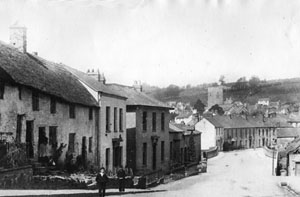 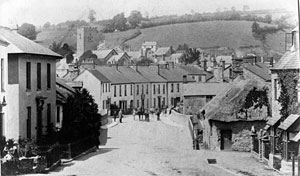 These two photographs show Briton Street and Brook Street c1900. The modern development of the town began in 1902 with the construction of Industrial Housing for the workers at the quarries, New Buildings, known for the first two years as Dunning’s Buildings after the quarry owner who had them built, although few quarry workers seem to have lived there. These replaced a block of 17th century cottages known as Bridge End Cottages, and a blacksmith’s workshop (occupied in the mid 1800’s by Thomas Ching and his son John and a rather large family) which had been built on the site of the ancient Barton farmhouse. A footpath which still exists connected the Barton to the farmland via the mill; the present farmhouse at Kersdown Barton was built in 1815. 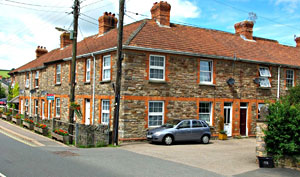 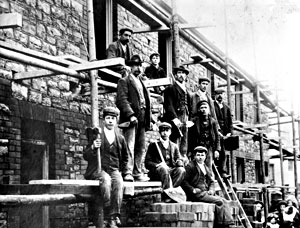 The rather splendid picture on the right shows some of the workmen building the houses in about 1900. 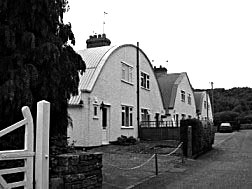 In 1922 Bampton Urban District Council embarked upon a programme of council house building. First to be built was the block of three semi-detached Nissen designed houses in Frog Street. They are barrel shaped and have galvanised roofs. They were built about the same time as Wembley Stadium and the Exhibition, and the first resident jokingly named them “Wembley Terrace”, even to the point of using the name in his address. The name has stuck, but never officially. Nissen houses are rare – the next nearest are at West Camel, not too far from Yeovil - and they were Listed Grade II in July 1998.

These were followed by three blocks of semi-detached houses on South Molton Road, and two blocks of four in Ford Road. Following the building of the school in 1938, the war stopped any further development, but soon after, the council houses in School Close and Meadow View were built.

Following the closure of the railway in 1963, the estate of Barnhay was built over the years 1967-1968 for Tiverton Rural District Council on land hitherto occupied by the railway sidings and goods yard. It incorporated sheltered housing for the elderly and a new fire station. Part of the estate swallowed an old orchard. At about the same time, the Lord’s Meadow Industrial Estate was built on old railway land, consisting of four light industrial units.

The next estate to appear was Market Close, beginning with fifteen houses built in 1975 as private homes, but after only three sold, Mid Devon District Council bought the rest, and in 1986 added six more houses and ten bungalows. They were built on the site of the weekly markets which by then were extinct. During the 1980’s, Bourchier Close was built, some houses and bungalows by hand by their owners, but mostly by local construction firms.

In 1996 the old primary school buildings in School Close were demolished, and during the summer of the following year a row of seven houses was built on the site, named Winifred Cliffe Court, named after the first headmistress of the school. 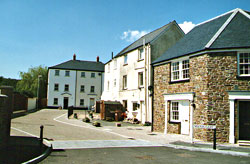 The site in Back Street between Spar and Rose Cottage, containing a small industrial area which eventually became disused, was cleared in 2005 and an estate of some 14 houses was built around the old Rose Cottage and named Newton Court.

The derelict Scott’s site was converted into a housing estate during 2006-2008. See also the images of this site as it used to be here.