A leather trade was operating in Bampton alongside the wool trade for some centuries, although on a smaller scale - William le Tannere was recorded in the Tax Roll of 1332.

Four cottages in Castle Street, since incorporated into one large building at No. 6, [on the right with the balcony in the old photo right] were a leatherworks in 18th/19th century.

It seems that dealers in bark were responsible for the destruction of large areas of oak woods in the area, for a joint petition from the tanners, curriers, and other leather-workers in Bampton, Tiverton, and all the towns of north Devon was heard in the House of Commons on 17th May 1717, stating that for a long time great quantities of oak bark had been exported to Ireland and elsewhere, and that there was not enough bark left to carry on their trades. 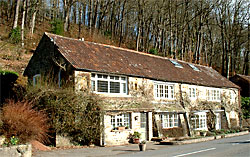 That was referred to a Committee with orders to consider the laws relating to the felling of timber at such time only when the bark will run.

A large barn, originally used as a bark store for use in the tanning industry, is now the 'Bark House Hotel' in Oakfordbridge. 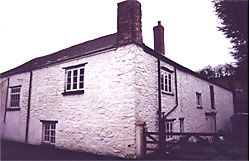 The Old House in Frog Street was a tannery. It had a bark mill where bark stripped from young oak trees was used in leather processing called tanning, in which animal skins were soaked for up to a year in some four dozen pits, in a liquid containing tannic acid obtained from the oak bark, resulting in them being converted into a tough leather. These traders became known as Tanners, whilst those involved in the bark trade were called Barkers (as in Ronnie Barker!). The gardens of a cottage opposite The Old House had been converted into a fellmonger’s yard by 1790, a fellmonger being a dealer in animal skins. Curriers dressed and coloured the tanned leather. See our page on Mills to find information on the old tannery mill. 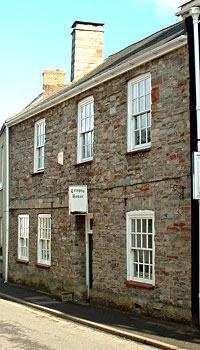 A leather-worker’s house was at 15/17 Fore Street, Crispin House (left), which still has a hook in a ceiling for drying leather, whilst The Bark House Hotel at Oakford Bridge was a storeroom for bark (above).

Traditional tanning employed oak bark. Oak bark provided tannin which, ground to a powder in a bark mill and diluted in water, produced tannic acid. It was the essential solution to producing leather from hides until the advent of chrome tanning in the late 19th century. It was stripped from both standing and felled trees, ideally in May, when the tannin was at its strongest, then stored under cover to dry out before being taken to the bark mill.

The process was slow and could take up to 18 months to produce good leather. Devon was among the leading counties making leather in 1840 - it had the resources. The hides of Red Ruby cattle were readily available - Friesians would have been useless as their hides vary in thickness. Oak bark was readily available and so was water to make the solution, but also to power the bark mill and for working the tanyard pumps.

Hides are an off-shoot from the meat industry; cattle are not bred purely for their hides. Local butchers sold the hides to the fellmongers or tanners - fellmongers dealt in hides and skins, and could prepare hides for tanning.

Quite a number of pits were used with the hides progressing through solutions of different strengths.

Mastering pits - dog excrement and warm water in these pits was used to wash out the lime. Hides were immersed here for mere hours here as the process could ruin the hide if left longer.

Leaching pits were where the tannic acid was prepared. It was left to stand for several weeks prior to use.

Spenders were pits in which the hides were hung vertically in weak acid.

Handlers were the pits through which hides were worked, with increasing strengths of tannic acid. The hides acquired their colour in these pits.

Layers contained the strongest liquor. Hides were laid flat in the pits. Immersion could take a number of months.

A most malodorous environment to be anywhere near! For some years the tannery at The Old House in Frog Street doubled as a girls’ school. It eventually merged with one in the centre of town, doubtless with great relief to the noses of the girls concerned.

By 1851 there were no tanneries left in Bampton, (so where the bark was being taken in the photo above is not known - although it has been suggested that it may be being taken to Bampton Station for onward transport to Exeter where tanneries were still functioning) but leather was being bought in for use by the 26 shoemakers and the few harness and saddle makers who lived in town. With farm mechanisation, the industry might have been expected to follow the decline of the sheep and wool trade, but Bampton being in hunting and riding territory, it survived; the last vestige, a saddlery in Brook Street, left in the mid 1980’s.