There is no historical order on this page - it's just a motley collection...

The chart below shows how the population of Bampton has changed since 1801. If you read carefully the pages of this History section, you should see reasons why the population was so much larger in the middle of the nineteenth century. You might wonder where they all lived, given the number of houses which have been built since the last half of the twentieth century! 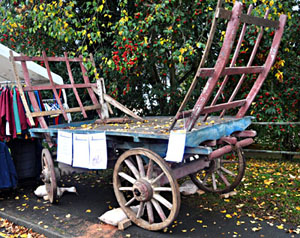 On the left above is a Bampton wagon built by George Davey c1900 being exhibited at Bampton Charter fair in 2014. It is owned, and has been restored, by a local resident.

Below is an old photo of carts outside George Davey's house and business in Silver Street, on Fair day c1910. 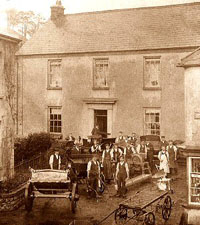 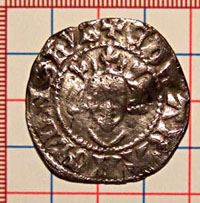 In 2014 a metal detectorist found the old coin shown here on the right - both faces are shown, and the square grid has 1cm spacing. The coin is is quite remarkably good condition, and at the moment is in the process of being identified. It is thought to be possibly of Edward II era. It was found in a field at Weston's farm called Fair Park - not where the old Fair was held, but possibly where animals could be placed on the days before the fair auctions took place.

We'll update this information when more is known.

Here the arms shown on Bampton tokens - Mercers, Cordwainers, Clothworkers, and Grocers. Below are shown the two sides of a Bampton token 1652 John Ball (16mm diamater). 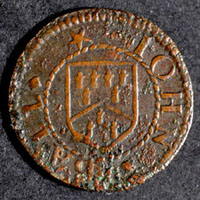 During the 17th century there was an acute shortage of small value coinage over the country, and larger traders in towns were permitted to mint their own ‘coinage’. This took the form of tokens, which were accepted as valid currency within those towns. Five of these tokens were issued in Bampton by four traders. John Ball, a grocer, issued a ¼d. token in 1652. Henry Ball, a clothworker, issued two in 1666, both having a value of ¼d., and in the same year Daniel Glas, a mercer, issued a ½d. token. 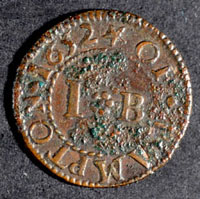 In 1669, William Yeandell, a cordwainer, issued a ½d. token. When the coinage situation stabilised, the Government refused to acknowledge the tokens or to exchange them for coin of the Realm, causing a fury of anger.

Mercers were dealers in fine fabrics, and cordwainers were shoe and fine leather goods makers - Cordwain was the finest tanned & dressed goatskin from Cordova in Spain, and used for bags, gloves and the like.