There were many organisations in the town during the later 19th century to keep people amused, including the Town Band (picture below is from 1911) which used to practise in the cellar of Leburn House, and a Horticultural Society who once hosted the radio programme Gardeners’ Question Time. In 1929 a public subscription was raised to build the Church Institute on land given by the church. Today it is known as St. Michael’s Community Hall. For about ten years after it was built, it was used by a variety of mens’ and boys’ clubs and associations, and a boxing club. During the war it was used by the military. [See Wartime Bampton.] 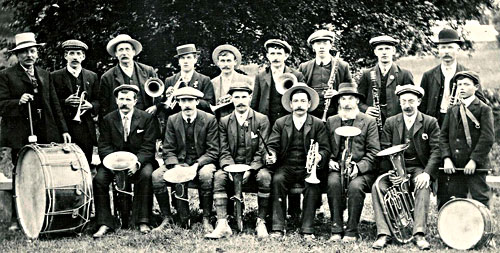 Following tradition, few beginnings and ends of the organisations are known.

Society for the Preservation of Fish in the River Exe
It was reported in the Exeter Flying Post of October 3rd 1808 that the committee and subscribers held their quarterly meeting at The White Horse Inn.

Bampton Agricultural Association
There is no record of when the association formed or folded, but during the 19th century it was very strong, holding annual ploughing matches, followed by a dinner.

Cottage Garden and Horticultural Society
On July 25th 1889 the society gave its 20th annual exhibition, for which Mr. Trickey of the Swan Inn was granted an occasional licence to sell liquor at the event.

On Thursday August 7th 1884, the week which saw the railway station opened, cheap return tickets, 1st, 2nd, and 3rd class, at a single fare and a quarter, were issued to Bampton from all stations between South Molton, Morebath, and Tiverton inclusive for the flower show at Bampton.

From the Exeter Flying Post, August 19th 1885: The annual flower show at Bampton on Wednesday, in connection with the Cottage Garden and Horticultural Association was to be held in Luke’s Park, a plot of land situated on a high prominence. During the morning a boisterous wind arose, and about an hour before the show was due to open, it assumed the violence of a gale. The judges were inside the marquée judging the exhibits when, amidst a blinding shower, a gust of wind carried away the tent and with it the several supports of the tables on which the plants, vegetables, and fruit were staged. The whole arrangement came down with a great crash, destroying a large number of valuable hothouse and exotic plants, ferns, and palms belonging to the gentry of the neighbourhood. The tent was rent to pieces. The weather cleared during the afternoon and the committee, in the face of the untoward occurrence, decided to throw open the field to the public, and arrangements were made for an open-air picnic.

Magazine Club
A Magazine Club existed in the late 19th century, which donated magazines to the Tiverton Infirmary.

Fuel Society
In the 19th century there was a Fuel Society which, on February 12th 1873, reported that it had distributed coal and wood to 150 families of the labouring class in Bampton. Also in that month, a Soup Kitchen was reported to be still in active operation supplying excellent quality soup.

The Ancient Order of Druids
In June 1896, Mr. E. H. Dunning of Stoodleigh Court [owner of the town quarries] gave a silver cup valued at 10 guineas [£10. 10s. 0d.], to be competed for by the residents of Bampton and surrounding parishes at the annual Druids’ Sports Day. [See Annual Fun Run below.]

Cricket Club
A Cricket Club was formed in 1896 and, apart from a break in WWII after which it re-formed in 1948, is a local force to be reckoned with. In its earlier days it didn’t have a fixed pitch, sharing with the football club until its’ playing season extended into the cricket season, when it found a permanent home at Morebath, a couple of miles away. Today it is known as Morebath Cricket Club.

Rugby Club
A Rugby Football Club existed in the 1890’s. Match reports in the press show that they often played against Exeter Rovers, always losing handsomely.

United Devon Association
In May 1899 a branch of this Association was formed in Bampton. Its purpose was to get the county of Devon better known nationally, and to this end had a book published, “The Book of Fair Devon”, which examined the county in some detail.

Carnival
For some years before The Great War, a carnival was held annually in November. In 1908 a request went before Bampton Urban District Council to leave the street lights (the dim oil ones) unlit until after the carnival procession so as not to detract from the presentation of the floats. It was resurrected in 1949 by Albert Fowler, but lasted only another nine years due to a lack of local interest.

Gymkhana
A Gymkhana was held for eight years during the 1960’s in a field belonging to Kersdown Barton. Two small fields had been made into a larger one for the purpose, but again, lack of local interest killed it.

Boxing and Wrestling
For some centuries, until the idea faded out in the 19th, bare-fist boxing for the benefit of the crowd took place in Bampton. It is referred to in the novel Lorna Doone by R. D. Blackmore. Men used to come out from a bar, strip to the waist, and have a good scrap without bearing each other any ill will. When one got fed up, he told his partner, and they went back into the bar for another pint. Bampton was renowned for wrestling matches, with contestants coming from Morebath, Dulverton, and villages across Exmoor.

All Night Revelry
If someone was available who could play the fiddle, the streets were soon filled with people dancing. This often continued all day and all night. The town band was formed in the 1850’s, and it replaced the lone fiddler, and any fine evening saw the streets filled with people dancing reels and the like to the strains of the band. When the band folded in the 1960’s, the instruments were refurbished and given to Bampton School.

Devilment!
Meanwhile, the local boys had to find some amusement for themselves, apart from driving the lamplighter mad. Before the advent of doorbells, a caller at a house was obliged to rattle the door knocker. Before the 1939/1945 war and probably after, the boys found the knockers to be a source of fun on an otherwise dull evening. A reel or two of cotton was produced, the thread being silently tied to and between all the knockers along and across Brook Street. The boys then retired to the shadows to await the fun with the passing of the next car, when all the doors along the length of the street opened to welcome their visitors.....

The Annual Fun Run
In 1946 the annual Bampton to Tiverton Fun Run was resurrected after a break for the war. It is run every Easter Monday and, by tradition, the starting gun was fired by the licensee of the White Horse Inn from which point the race starts. It is open to anyone of any age. Originally the race was run from Tiverton to Bampton, the runners being Bampton people, and it was part of a féte which was held in the first few years of the 20th century. It was held on Easter Monday in the field adjoining the erstwhile chapel of St. Luke - the field in which Bampton Fair took place in the 13th century. The event was organised by The Ancient Order of Druids whose Bampton head­quarters was The Tiverton Hotel. From the hotel, members of the Order processed in the full splendour of their regalia and led by the town band to the féte. Apart from a few stalls and sideshows, it consisted mainly of sporting activities for the youngsters, a typical event being a timed climb up a greasy pole, the winner receiving a leg of mutton for his trouble. Imagine a modern child winning a leg of mutton, let alone being allowed to climb a greasy pole! One highlight of the day was the entry of the runners to the ground, doubtless to loud cheers. The event ceased for the war years, but the race is not now associated with any other event, and the numbers of youngsters taking part are in inverse proportion to the number of runners.

10 km Run
In recent years, another running event has become popular. The route starts and ends in Bampton, via Morebath and Shillingford. It takes place on the 3rd Saturday in June.

Menagerie
An annual visitor to Bampton in winter was Bostock’s Menagerie, which set up in a field at Kersdown Barton. It toured the west country giving two shows a day. In 1892 after a heavy snowfall, it had to hire an extra fifteen horses to pull itself through the snowdrifts to their next port of call, Wiveliscombe, nine miles away, where they arrived some hours late.

The Ancient Order of Druids was one of four such Orders or Societies which had branches in Bampton. The National Friendly Deposit Society, earlier known as the National Deposit Club, was based in the Drill Hall. The Ancient Order of Foresters had an office at 5 Frog Street, whilst the National Friendly Society operated from The Great House. Most people belonged to one or another of these societies; in fact men joining the Armed Services were always asked to which Society they belonged. One reason for this was that National Insurance Cards were issued by them on behalf of the Government. They also had a number of other uses. They operated a private health insurance scheme which supplemented by 5s. the Government sickness benefit of 7s.6d. or 10s. They also offered mortgages. The Druids’ Lodge number was 727, and they advanced a mortgage on a property in Brook Street in 1916. They had arrived about 1887 – they held their third Annual Meeting on May 31st 1890 at The Swan Inn under the title of Druidshayne Lodge*, using the name of the nearby farm, Druidshayne, which was thus known from around 1800. They were still here in 1929, although the Order today has no knowledge of that Lodge having existed in Bampton. Alongside these, the vicar of Bampton ran a Provident Club in the later years of the 19th century and into the 20th. Subscribers paid 1s. per lunar month, totalling 13s.6d. over the year. This they got back at Christmas with a bonus of 3s.6d.

*In 1889 a report in the Exeter Flying Post stated that the Lodge was then known as Hayne Lodge.