The Roman Army in Bampton

The Roman fort was on the outskirts of the town, and its site in farmland is a scheduled and protected ancient monument.

Below is an intriguing aerial photograph (thanks to John Record for this) which shows crop marks in a field on the outskirts of Bampton. 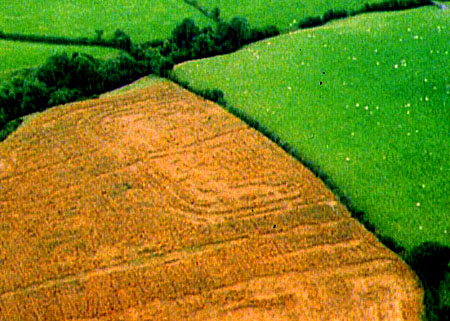 Half the outline of the fort can be seen in the yellowish crop - and maybe less distinct marks in the grass on the right of the hedge line.

It is also possible to see parts of Roman roads and trackways through the fort.

The photo was taken in the 1970s - it would be terrific to find out more with modern archeological technology. The site occupies about 2 acres.

The fort may have looked something like the one shown on the right which is at Elginhaugh in Scotland. The inside of the defences is approximately 100m square.

The fort was surrounded by 4 banks and ditches (the usual was one or two) which makes one consider the possibility of it being a rather more important one and in longer occupation than was the norm. Possibly it may have been some kind of bureaucratic centre rather like the Statio at North Tawton - both are about the same distance from the Legionnary Fortress at Exeter, some 21 miles. It also appears that it may have been adjoined by a vicus - a civillian settlement supplying the fort with the essentials for living, which may have included pottery from the local clays. Certainly there has been clay extraction nearby and there are local field names which include "Kiln Yard". Experiments have been made with that clay with the help of East Devon College [now "Petroc"], and one sort of clay (there are two types of deposit) baked to an almost exact replica of some Roman pottery sherds found in the area.

There is further evidence of the presence of Romans in the Bampton area: Roman 4th century and early 2nd century coins were found in a garden in Frog Street along with an eastern Mediterranean coin of around AD300. A Roman coin and a piece of jewellery were found  not far from the Motte, both second century AD. More Roman coins were found in the river by the bridge in 1914. Whether they were dropped by Romans or non-Roman locals is unknown, but yes, the Romans were here!

A rather larger Roman fort has been discovered in Upton, which also seems to have a vicus (an unplanned settlement on the outskirts of the fort). Perthaps in this area the Romans were 'up to something'. Our 'Bampton' fort above has 4 banks and ditches around it, whereas the norm is one or two, so perhaps it was occupied for a lengthy spell. It may have been a bureaucratic centre, or 'Statio'. It is on a direct road link from the fortress at Exeter and passes the (one-ditched) fort at Bolham.

It seems very likely too that the Romans (a well-organised bunch) may  have been the first to quarry the local stone - building the small fort, building roads, they would be unlikely to overlook the plentiful supply of suitable material available all around Bampton.