Near Bampton there are a number of places very well worth a visit.

In Devon, the N.T. currently protects some 91 miles of coastline - details are given in the Members' Handbook. Some of this is located where Exmoor meets the sea, for instance between Woody Bay and Coombe Martin. To the east of our region, the N.T. owns areas of the Quantocks, including Beacon and Bicknoller Hills, and further east still are Glastonbury Tor and Walton and Collard Hills, overlooking the Somerset Levels.

There are too many to list them all here, but some suggestions which are close to hand are:

The N.T.'s large collection of horse-drawn carriages is housed in the stables (you can even have carriage rides around the grounds). Walks allow one to explore parkland and attractive Victorian gardens.

Dunster is a very attractive village containing many beautiful old houses and a Yarn Market in the centre of the main street. The castle sits dramatically on top of a wooded hill, and is surrounded by beautiful gardens and parkland.

The 13th century gatehouse survives, but the present building was re-modeled in 1868 for the Luttrell family who have lived here for over 600 years!

The water mill is built on the site of one mentioned in the Domesday survey of 1086, and the present one dates from the 18th century and was restored to working order in 1979. It is a privately owned business, and you can purchase freshly-milled flour and meusli.

This is now a nature reserve and the headquarters of the Somerset Wildlife Trust, as well as being a Visitor Centre for the Quantocks.

This estate covers 12,500 acres of the Exmoor National Park and includes Dunkery Beacon (the highest point in Exmoor) and Selworthy Beacon. Its traditional cottages and farms are grouped in and around villages which include Selworthy, Allerford, Bossington, Homer, and Luccombe. The Estate includes coastline between Porlock and Minehead, and there are extensive footpaths (over 100 miles?) through woods, fields, moors, and villages. The area is noted for its diversity of wildlife. 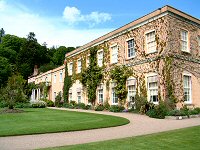 The house was rebuilt in 1778 to the design of John Johnson. Furnished as a family home, it also houses a costume collection and a Victorian laundry.

It is close to Marker's Cottage (a medieval cob house) and Newhall Equestrian Centre (which is on the estate).

Clyston Mill is a Victorian water-mill on a Doomsday site. It has opened to the public for the first time in 2002. Open Sunday, Monday, and Tuesday afternoons 2pm - 5pm. Park in the village of Broadclyst and walk down the signposted track.

This house was built in 1869, a rare survival of the designer William Burges: it combines medieval romanticism with lavish Victorian decoration, and the smoking and billiard rooms, elegant boudoir and drawing room all give an atmosphere of grand country life. Knightshayes is the closest NT property to Bampton and is only about 7 miles away.

The celebrated garden features a water lily pool and topiary, rare shrubs, and fine specimen trees. The Victorian walled garden is a must. There are attractive woodland walks and an excellent plant shop.

This unique and unspoilt island in the entrance to the Bristol Channel is home to a fascinating array of wildlife (including the famous puffins) and dramatic scenery.

There is a tiny village will a pub, a Victorian church, and a 13th century castle. Sea passages from Bideford (all year round) and from Ilfracombe (summer only). www.lundyisland.co.uk

A fishing lodge, now a tea garden, built c.1832 in a wooded valley at the join of the East Lyn and Hoar Oak Water. The focal point of several beautiful and spectacular walks. 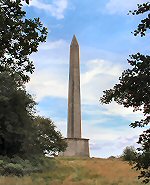 The monument on the top of the Blackdown Hills close to Wellington in Somerset can be seen over very considerable distances, most obviously when traveling along the M5. It was built to commemorate the achievements of the Iron Duke whose family once owned land in this area, and from which he took his title.

The monument is 175 feet high and the surrounding land is owned by the National Trust - car parking is available close to the monument and is free. Brave souls can collect a key (and a torch!) from a nearby farm and climb in total darkness to the small observation windows at the top - perhaps now this has succumbed to H&S regulations. A plaque aids identification of landmarks up to 75 miles away. A lone cannon stands at the base, where there used to be four but they were melted down to help the war effort sixty years ago.