Bampton is about 3 miles from the boundary of the Exmoor National Park - this national park, being one of the smallest at 170,000 acres, is therefore very easy to explore by car. One third of Exmoor lies in Devon, the other two thirds in Somerset. The highest point on the moor, Dunkery Beacon, is only 20 miles from Bampton.

The park contains a wide variety of countryside from rolling farmland to the high moorland; Exmoor meets the sea with craggy cliffs and wooded valleys, and the rivers are fast flowing and picturesque.

Much of Exmoor is farmed - the wild moorland accounts for about a quarter of the area, and about one tenth is woodland.

Exmoor is rich in wild life. Perhaps the most famous are the unique Exmoor ponies which frequently graze along the sides of the road (or even stand in the road!) - they are of stocky build and a very attractive chocolate-brown colour.

Less frequently one may see herds of red deer in the distance - they are shy of humans, but if not disturbed can remain visible for some time. At night time one may come upon significant numbers of them by the roadside. Overhead there is a rich bird life, the most captivating of which are the buzzards, circling high and sending smaller creatures diving for cover. 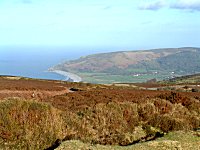 It can be explored by car, on foot, or by bicycle, and there are plenty of opportunities for riding and pony trekking.

On the right is the view from Dunkery towards the Bristol Chanel. Wales in the background!

There is such a plethora of places to visit that it is difficult to select just a few, but here is a sample: