It is thought that the first Christian church in the area was Celtic, founded by St Petroc in the 6th century, being one of seven founded by him on Exmoor. Four miles east of Bampton is the hamlet of Petton whose church, dedicated to St Petroc, dates from ancient times. At Shillingford (Diptford), between Bampton and Petton, was another chapel dedicated to St Katherine which fell into disuse in about 1790, the remains being all but invisible - but both were in use in 1107.

There is evidence that the Bampton parish church was dedicated to St Mary in the early 13th century - about a century later, the chantry chapel of St Mary was built beside the church, and to this day one of the old lanes leading to the church is called Mary Lane.

A short video guide to the history of the church and things to see when visiting can be found here. 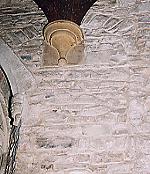 Evidence for the ancient origins of the church are not always obvious. This photo shows part of an original late Saxon window arch which can be seen in the south wall of the church.

Move your mouse over the picture on the right and you'll see how to spot it.

A 15th century Lord of the Manor was Sir William Bourchier (after whom Bourchier Close was named) who did much for the town and the church, where he had the north aisle constructed and the Rood Screen carved in 1450. His heraldic arms included a reef knot and water bougets (leather bottles used to carry water), features to be seen in the church and on the school badge.

The adjacent 'Swan Hotel' is thought to be one of the oldest buildings in Bampton, being built in 1450 to house the stone-masons working on this construction. The oldest part is what is now the dining room.

The two yew trees near the church porch are thought to have been planted between 1483 and 1485, over 500 years ago! The trunks are encased in stone to stop cattle, which used to graze in the churchyard, from nibbling them, yew being poisonous to livestock.
See the new web-site of the Ancient Yew Group. We have been informed of a newly published book – “Yew-A History” written by Fred Hageneder - there is more information on the link above.

Inside the church are many interesting features, including the old town stocks which were last used in 1862! We understand that it was to improve the mind of a man who had over-indulged with alcohol.

Most visitors to the church fail to spot an item of our heritage which is thought to be unique - the church boiler and heating system! The Perkins High Pressure Hot Water Heating System was installed in 1897. Only seven of these have been found still existing, and this is the only one which is still in use! More information.

Our church heating system was developed by a guy called Angier Perkins, originally from the USA. He was joined in the UK in the 1830's by another American to learn about this new science. Being from New England, Joseph Nason saw a bright future for this technology in his homeland. After learning the craft, he returned to Boston and went into business with his brother-in-law James Jones Walworth. Together, these two men installed some of the first steam and hot water heating systems in the new world. One of the most notable installations undertaken by the duo was a modification of the central heating system at the White House!

Elsewhere on the web-site you can find information about church services, and about the very active bell-ringing group, or you can look at views from the tower.

Of interest to genealogists, there is also a comprehensive list of the graves in the churchyard which can be found here.

A chapel dedicated to St Luke (and giving its name to Luke Street) was built sometime before the 14th century at the top end of what is now High Street, where the house Grey Gables now stands. The annual fair was 'renewed' by Royal Charter in 1258 (the actual origins are not known, but mention is made of the Fair in 1212, but 1180 may be nearer the mark) which allowed Osmund, the parish priest, to hold a fair on the feast of St Luke, October 18th. It was held in the two fields beside St Luke's Chapel, still called Upper and Lower Luke's.

A Baptist Chapel was built in Luke Street in about 1690, but by the end of the 18th century, it had fallen into disuse. Although it was rebuilt in 1860, it finally closed in 1967 and was converted into a house: the rear gardens still contain the old cemetery.

A Methodist Chapel stands in Mary Lane. It was built of local stone in 1862, but was added to at a later date. The picture here shows it with snow! The chapel closed in 2005 - a brief history can be found here. It has now been converted into two houses. 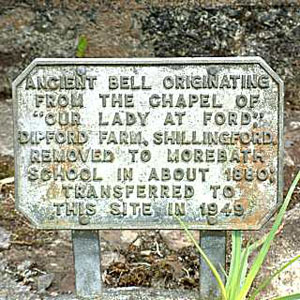 This sign used be found in the middle of the courtyard of the old Bampton Primary School where the old school bell hung.

We are told that the sign is wrong! The chapel at Diptford was dedicated to St. Katherine, whilst the one at Ford was St. Nicholas. If anyone has light to shed, please email us.

And where are the sign and bell now that the new school is built? 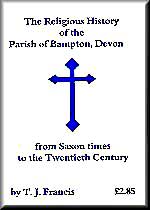 This book "The Religious History of the Parish of Bampton, Devon" by a local author was published December 2001. For details of how to obtain a copy you can email here.